The Rutland Sinfonia gave its first concert in January 1976, having been formed the previous year by Barry Collett. The players were drawn from a wide catchment – which continues to this day – including Leicestershire, Lincolnshire, Northamptonshire and Cambridgeshire, and of course Rutland itself.  The Sinfonia were saddened by the passing of Barry in 2020 but his legacy lives on with the adventurous concert programmes and commitment of the conductors, committee and players.

The Sinfonia quickly established an excellent reputation for the quality of its performances and repertoire. Under Barry Collett the Orchestra performed a remarkably eclectic range of music: from Purcell to world premieres of new works; little known Symphonies by Franz Schmidt, Chausson, Kurt Weill, Bantock, Weber, Rimsky-Korsakov; major choral works by Handel, Haydn, Mozart, Dvorák, Elgar, Mendelssohn, Brahms and Schubert; and lesser known works of the great composers of the 19th and 20th centuries alongside standard works from the orchestral repertoire. The Sinfonia played at prestigious events including two concerts at the Malvern Festival and at an Elgar Birthday Concert in Worcester Cathedral. As an Elgar scholar, for which he was awarded the gold medal of the Elgar Society, over the years Barry Collett and the Sinfonia performed the entire orchestral opus of Elgar’s music. This included many first modern performances of the early works thought lost.

Barry and the Sinfonia in Uppingham School Hall for their first concerts in the mid/late 1970s.

The Rutland Sinfonia was the first non-professional orchestra to make commercial CDs; the recordings of Elgar’s Powick Asylum Music and First World War pieces, all of which Barry Collett had rescued from oblivion, were world premiere recordings and sold and were broadcast world-wide.

Barry Collett and the Sinfonia play the Powick Asylum Music by Edward Elgar at Powick.

The Sinfonia Winds and Brass in Corby Festival Hall, the home of their concerts in the late 1980s and early 1990s.

The Sinfonia playing “The Dream of Gerontius” by Elgar with Barry Collett in Northampton Cathedral on 25th March 2000. 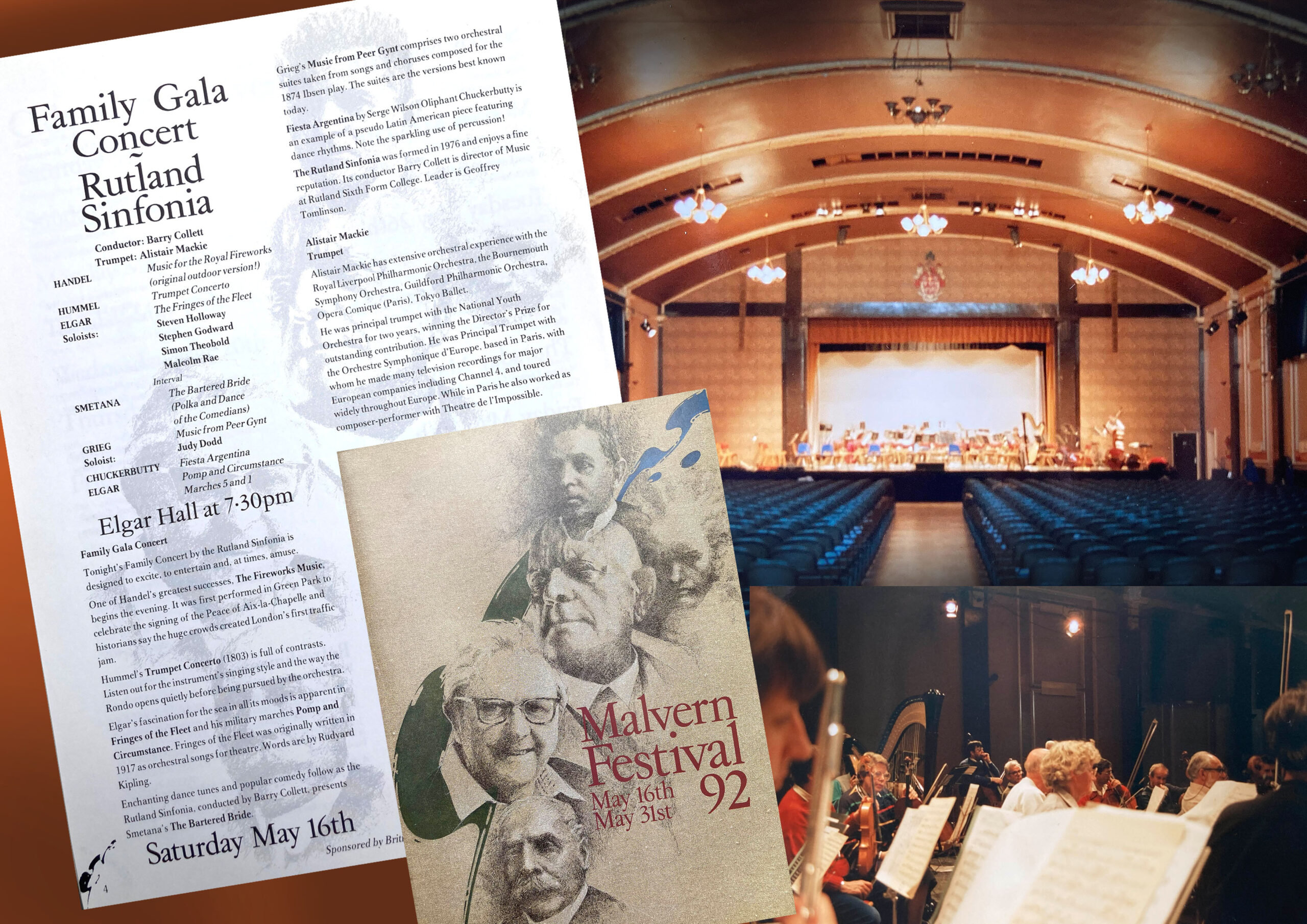 The Rutland Sinfonia performed twice in prestigious concerts at the Malvern Festival; in April 1991 and May 1992. The 1991 concert was the very first concert in the newly renamed Elgar Hall. The 1992 concert (above) saw a performance of the rarely heard “The Fringes of the Fleet”.

Under Paul Hilliam’s leadership the Sinfonia has moved from strength to strength. Paul invited Eduardo Vasallo, Principal Cello of the City of Birmingham Symphony Orchestra to be our musical patron and Eduardo proved a popular and inspiring soloist in his concerto performances with the orchestra. Whilst maintaining the original vision of the Sinfonia’s founder, Paul and David have taken the Sinfonia into new and exciting areas of the repertoire with Paul instigating a concert series that showcases the talent of local young musicians by providing the opportunity to perform as soloists with the orchestra.

David Calow’s early seasons presented concerts of new repertoire with the Sinfonia and in two concerts worked with the renowned Schubert scholar Professor Brian Newbould performing the East Midlands premieres of his completions of Schubert’s 7th and 8th “Unfinished” symphonies. In more recent seasons David has shown the different side of the orchestra repertoire presenting annual sell-out concerts featuring popular favourites from the stage and screen.

Over the years the Rutland Sinfonia has been associated with many local and national charities raising thousands of pounds for good causes. More recently these have included LOROS, Batten Disease Family Association, SHINE, The Royal British Legion and the Leicestershire and Rutland Air Ambulance.

Now well into its fifth decade, the Rutland Sinfonia retains its unique friendly and collegiate atmosphere and commitment to fine music making. England’s smallest county can be proud of possessing such an accomplished musical institution.